We're on the pursuit of hoppiness.

Smylie Brothers Brewing Co. only opened on June 24, about two weeks ago, and I’ve already been there twice. It’s safe to say I have a new favorite local brew pub.

Located on Oak Avenue, just minutes from the Davis CTA stop, Smylie impresses from the moment you spot it from the sidewalk. Whoever designed the brew pub gets an A+ for their architectural details. This place looks like a gleaming, rustic cabin that literally dominates the block with its expansive windows and wide patio.

I ordered the flight of Smylie’s six house beers currently on draft. The first time I visited Smylie, I stuck with their signature California Common (5% ABV, 36 IBUs), an American beer style characterized by its lager fermentation used with an ale recipe. I found it light and clean, a bit citrusy – quite well-suited for pairing with dinner.

I visited with my mom, a diehard Miller Lite drinker, so I gave her the flight glass of the California Common in hopes that she would drink it and enjoy it (it worked I think), as well as Smylie’s Farmhouse (5.5% ABV, 28 IBUs), a light, fruity and slightly spicy saison. I didn’t get more than a sip of this one, as my mom quickly claimed it as her own, so I guess that says something about the beer’s appeal to the light beer drinkers out there.

The other four from the flight were mine. The biggest surprise had to have been the Dunkelweiss (5% ABV, 13 IBUs). This style of beer is nothing more than a slightly maltier version of a German Hefeweizen, so although it looks dark, it tasted closer to a pale ale. This is one that I think I will order a full glass of next time. It was quite delicious with its subtle banana flavors offset by biscuit maltiness.

The Pale Ale (6% ABV, 38 IBUs) tasted light enough to pair easily with dinner, just like the California Common, and it was a little bit maltier than the average pale ale I drink. The IPA (7% ABV, 65 IBUs) was a little lighter than the usual IPAs I drink, but it’s hard to match the likes of Revolution’s Citra Hero, so I’ll give this one credit. It provides the hops and does the job. Finally, the Porter (6.5% ABV, 42 IBUs) was very tasty, even for someone who drinks malty beers as rarely as myself. It had a clean finish and a light-ish body for a porter. 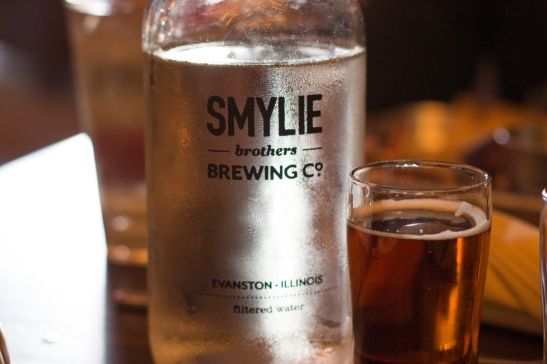 While enjoying all those delicious house beers, it’s impossible for me not to wash them all down with something great. And here’s a confession: Both times I’ve eaten at Smylie, I’ve chosen the same exact dinner. Behold, the truffled mushroom pizza.

The first time I went to Smylie, the kitchen was all shut down except for the pizza, and I was quite hungry, so I was forced to order pizza. That’s when I ordered the truffled mushroom pizza and got my first taste of this earthy, tangy masterpiece. Being the mushroom fan that I am, I would eat almost anything smothered in truffle oil, so when you put it on a pizza and top it with wood-roasted mushrooms and fresh mozzarella, I’m sold. With such a thin crust, this is the kind of pizza I could easily eat all by myself, if not for the courtesy to share it with my family and friends, whoever is dining with me. And that’s why I had to get it again, just for more of that savory mushroom action. 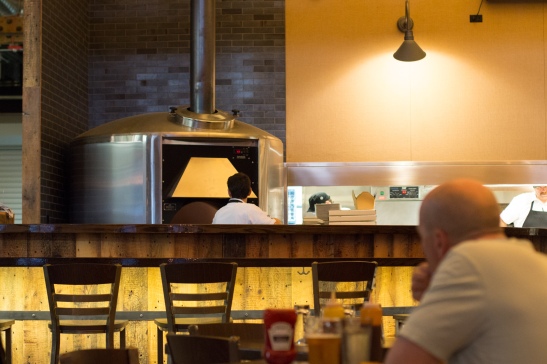 The beer is good enough to hold its own in my opinion, but when I can go somewhere that brews their own beers and makes their own wood-fired truffled mushroom pizzas, that makes for a winning brew pub. I’ve been to Smylie both weekends it’s been open so far, and just writing this blog posts makes me want some more Dunkelweiss and pizza.

It’s way too soon to rule out a third consecutive weekend at this point.